When bff with bf had left and me and bae had had our wedding night it was time for a few days of honeymoon. When planning this whole trip this waterfall, Svartifoss, was the only request I got from bae so naturally I planned for us to go there. Reason for visit: it looked a bit like in Dragon Age: Inquisition, yes I knew I married a gamer 😛

Anyways, we drove up to the national park of Skaftafell, weather wasn’t too good but with rain gear on we started the S2 hike, about 5 km and we would pass some waterfalls and turf houses.

The hike is easy, the trail wide and most is gravel. Some stairs. It seemed a lot of people just went up to Svartifoss and then back down the same way, we crossed the little bridge and walked to Sel instead with a stop at the top of the mountain to look out over all the rivers of meltwater from the glacier. Had it been a clear day I think the view would have been stunning!

On our way down to Sel we were almost alone, a rare occurrence in Iceland! Quite nice though. This part of the trail was also just an easy walk.

So you could enter these little houses which was really nice, lovely to get out of the rain for a minute and have a quick tea break. Walking back we took the trail rather than the road and then got clearer views of the other waterfalls: Magnúsarfoss, Hundafoss, Þjófafoss. Also, almost no tourists on this side of the river.

Once back at the camping and information center we had a toilet break and some lunch before we walked over to the glacier, following the easy part route S1 there and then taking the harder part of the same route on the way back. 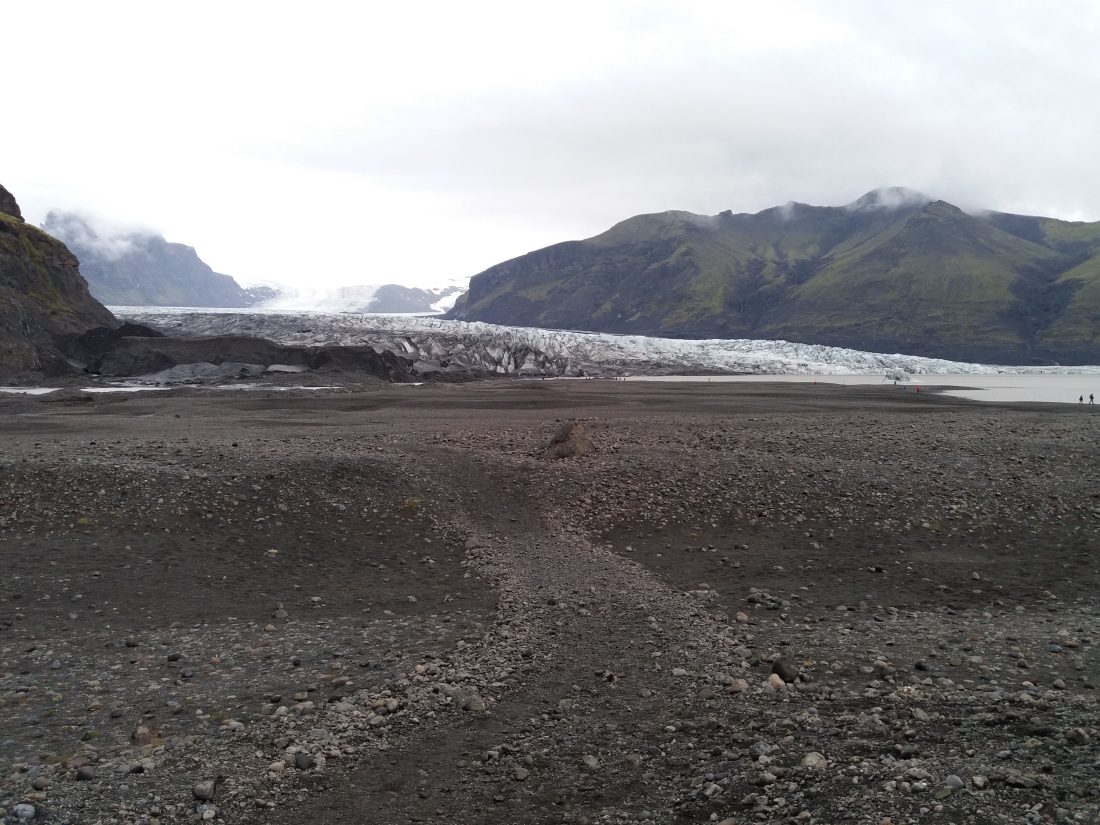 I’ve actually never been on a glacier before and thought it mostly looked dirty? And also a little pitiful? Seeing as we had to walk quite the beach before we got up closer to the ice, it must have looked more impressive before it started melting. Here as well, most people seemed to stop at a viewing point before heading back. The lack of people could of course have been because of the weather but going to Iceland to hike? Come on, I had sort of planned for hail, snow storms and tornadoes… This little drizzle didn’t do much harm!*

So that was our day in Skaftafell national park! We both enjoyed it very much. My recommendation for this part of the country though would be to have more things planned since the long drive through the lave fields are quite boring actually. Also there aren’t that many places to stay. The two hotel nights we had in this area cost as much as the Airbnb for the first 5 nights I think, insane!

*Except that my rain gear wasn’t totally waterproof and chilled me quite badly so the day after I got fever chills and called my mother way too late in the evening when I though I was dying. Yes, I become like a middle-aged man when I’m sick 😛

View all posts by dorkydva

It's all about perspective 😁😋😃 Happy Friday lovely friends, hope to see you at #piggyscoffeefriday but I could be up for a #plushiebeerfriday later too!